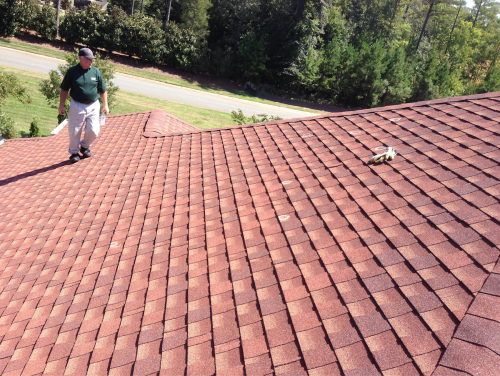 In many parts of the country, spring showers often bring May flowers. In the Charlotte area, however, spring showers often bring hail and its resulting damage to local roofs. Before they pick up the phone to call someone to repair their roof, many homeowners know they should call their homeowners insurance company to see if the damage is covered. What all too few realize is that before they call their insurance company, they should place a call to an independent roofing specialist.

One reason is that a new roof is a big deal. It’s one of – if not the single most – expensive item that you as a homeowner will likely have to replace. It’s also a major expenditure for your insurance company – particularly when it has to fund the replacement of not just one roof but many roofs in a single neighborhood or section of town that was impacted by the storm.

In the course of replacing our own roof after it was damaged by hail, we spoke with one certified roofing specialist who had years of experience inspecting roofs for major insurance companies. His advice was sound – get your own independent expert to evaluate any damage to your roof. The reason? Oftentimes, when there has been extensive storm damage in an area and many adjusters are needed, insurance companies will hire subcontractors with varying levels of expertise to assess client claims. Their lack of experience, overwork, or a host of other issues, may lead them to deny a perfectly legitimate claim. Also, these assessors work for the insurance company – not for you. As such, their role is to protect the interests of their employer.

In our own case, our initial claim was rejected. Due to our professional background, we knew the damage in question had been caused by the hailstorm – that’s an advantage the average homeowner might not have. We also had an independent assessment in hand to back up our claim. When we insisted that the insurance company reevaluate their finding, the investigator who came out immediately realized that our roof did in fact sustain extensive hail damage and the replacement was covered. Also, the gutters were damaged from the hailstorm and were replaced at the same time as the roof.

We wanted to share this experience so that other homeowners understand that they have options when dealing with storm damage and there is help out there for people who have legitimate claims. Your first step should be contacting a certified roofing specialist. Please contact Gary Palmer for a referral @ 704.544.0367 – Ext. 100.