Go big or go home to your new custom home? 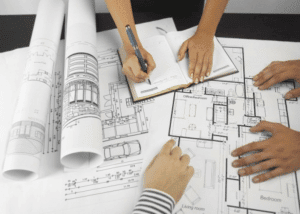 No matter what the amount of their individual budgets, one of the questions that most custom home buyers wrestle with is: how much home can we afford? Oftentimes when people are designing a new custom built home, they look at a floor plan’s “extra” spaces – future bonus rooms, floored attics, unfinished basements, or that spot where a pool housecould eventually go  – as places where they can plan future growth. The question savvy custom home buyers should ask is: will planning for future growth now save money or cost us more in the long run?

The short answer is: it depends!

Many times, it costs less to build these spaces on the front end if it’s at all feasible for your budget. Why? Because of economies of scale. When you’re building a new custom home, you already have a sheetrock crew on your job site; you’ve already paid their mileage, their labor to pick up and haul in countless pounds of materials, their finish crew, etc. It simply costs less to add a few square feet of materials and a few extra hours of labor now than the time and expense of re-assembling that crew and having them start again later from scratch. The same holds true for most trades.

Smaller quantities also may cost you more. To lay the foundation for a small pool house after your main home is built, a concrete company may charge a higher price per cubic yard. (Not to mention the toll their heavy equipment would take on your mature lawn and landscaping a few years down the road.)

From a permitting standpoint, even if the shell of a space is just framed in, it would fall under the initial building permit, eliminating the time and expense of obtaining an additional permit later.

In general, we recommend planning on at least a 5- to 7-year timeframe when you build – meaning that if you’ll want that larger laundry room in 5 years because you plan on starting a family, build it on the front end. It’s important to note that some of your future dreams may not be feasible if you don’t plan ahead. For example, if your home is built on a slab, it may not be possible to move water lines later without an exorbitant expense. If you are planning for growth, it pays to work with a qualified professional contractor – preferably with a solid track record in remodeling – so they can design the expansion into the initial build. They can offer creative solutions to issues that might come up, rough in water and drain lines for sinks and other utilities, plan foundations and load-bearing walls for expansion, and more. Having to open up and expose walls in already finished areas to gain access and run plumbing and electrical for future remodeling can be an added cost.   Ultimately, planning ahead for little things can make a huge difference in reducing future expenses.